On 24th May, I went on a school trip (yes!) with my language school to Mantova (Mantua ancient name) although my classmates didn’t go. I have been once before but when it was raining with friends. This time however, it was hot and we had activities and visits planned and took the train altogether.

I was lucky enough to have been given a lift by my teacher who lives not too far from me, as we went early in the morning and the buses from where I live are not always at convenient times! The trip was a good opportunity to practice speaking Italian as I didn’t know the other students but we were at different stages of our learning which was clear from listening to them on the train. Thankfully my teacher was on the trip with us too so I did know someone at least!

The first visit was to Palazzo Te where we had our own guides to take us around and tell us about the history etc. They were trying to speak more slowly and clearly though as they knew we were learning the language. We were split into two groups to make the visit more manageable. There were some really beautifully painted rooms in the palace and there was a lot of talking! Even in English, I would have drifted off with the amount they were saying about the history and analysis of the paintings! I did take a lot of photos though! 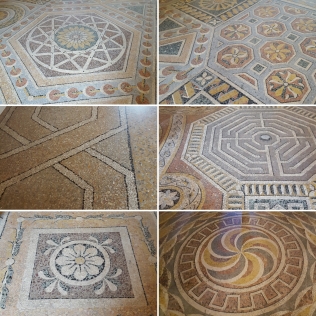 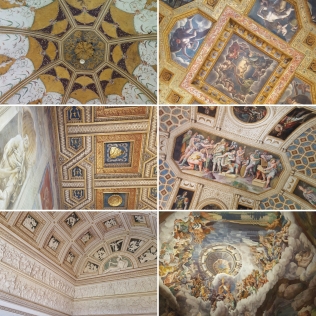 The intriguing feature in this palace were the patterns on the ceiling matching those on the floor (shown in the photos above). Each room had a different pattern on the ceiling, all highly decorated but the pattern and geometry was also reflected on the floor of that room which I really loved.

There was a separate building within the grounds which had a ‘secret garden’ and grotto which was interesting but also the view back to the palace was special too.

We visited the café after the tour and sat outside for a short while and had a drink and something to eat if we wanted to as some people had brought a picnic but others didn’t (myself included as I didn’t want to carry things around with me!). We sat in the grounds at the front of the palace in a park for a while before walking to our next checkpoint.

Then we went on a boat trip together on the lakes that surround Mantova, with some great views of the buildings but more enjoyably; fresh air, breeze and relaxation! Some of the time I sat in the sun and some under cover as it was so hot and bright. There was commentary as we were going around but of course; it was in Italian so I didn’t really pay that much attention.  Many people had their picnic lunches sat on the boat. I did buy a drink and a few snacks on the boat from downstairs but was looking forward to an ice cream afterwards! Major highlight of living in Italy is their gelato!!

After the boat ride we got off and had a break, lunch for some and a drink etc. I used this time to go and explore Mantova for myself and at my own pace while the rest mostly stayed by the lake together. I had an ice cream and bought some postcards, saw the streets and buildings I had previously seen in grey skies from under an umbrella! There are shops and cafés etc. too but there wasn’t enough time to do shopping before meeting the group for our next visit.

Next was a short walk to the Palazzo Ducale and the Castello di San Giorgio (Castle of Saint George) for another guided tour. Two of the key features in here I will remember are the spiral staircase which was designed for the use of horses so was a slightly staggered sloped staircase which I really liked.

The other feature of note was the ceiling in one of the rooms which was painted as though you were looking up through a hole to the outside with a balcony with people looking down on you and a view of the sky and clouds. We had been shown this image in class before so I recognised it and now I will remember where it was from!

We had to exit the building and walk around to another entrance for the main Palazzo Ducale tour and it had many internal courtyard gardens which were lovely to see through the occasional uncovered window.

Again, there was a lot explained about the history and analysis of the paintings etc. but I did admire more ceiling and floor designs…

After the final visit, we decided to get a later train so we weren’t rushing the end of our trip and split into smaller groups to explore before heading home. I had a great time and certainly had the opportunity to practice my listening skills!

In case you werw wondering, that is my Italian teacher Carlo on the train next to me and yes, we all lay on the pebbled floor of Piazza Sordello for a photo and then rurned into a flashmob, both at the request of Carlo, and created archways that we all ran under in twos for quite some distance for all to see!! What a laugh he is and we all enjoyed ourselves!

Like Loading...
This entry was posted in Being Social, Italian Language, Mantova (Mantua), My Italian Adventure 2016, Trips and Travelling. Bookmark the permalink.