My Dad’s Visit to Modena

On Wednesday 4th May, my Dad came to Modena to visit me for a week. On Wednesday after he arrived in Bologna and caught his first Italian train, he arrived in Modena and found his hotel to check in. I met him and went to the hotel to meet him and drop off a bag of some of my things to stay over and we went for a drink. I told him that I now have a boyfriend in Italy(!), Carlos, and that they would meet during his stay. We went for dinner at Erasmo for a pizza which was nice. In the evening we played cards… it’s been a while so I really enjoyed that!

On Thursday 5th I went to meet Valentina at the school she teaches in to help out with a class for a lesson. The students were able to meet a native English speaker (aka me) and I spoke to them and helped them with a task based on a film I had watched with Valentina that the class had also watched at school called Looking for Alibrandi.

After the session, I went to my Italian lesson but left early to have lunch with my Dad at Trattoria Aldina opposite the indoor market which is basically in a flat in a normal residential block. The food was delicious and it was a real experience recommended by Valentina. My Dad was well impressed and even by the end of his holiday, thought it was probably the best of the places he had eaten in.

In the evening we met up with a small group of my friends for a dinner together at Pepperoncino including my friend Valentina, Carlos, Olga (from Italian lessons) and her Fiancée Daniel (whose wedding I was invited to on 20th May!). A great night and some lovely group photos! Dad getting to know Carlos and Daniel with boy talk while us girls talked!

On Friday 6th I was given the afternoon off as Frenchy had a play date with her friend coming over with her Mum so I could babysit in the evening instead, allowing Valentina and Andrea to go to the theatre in the evening. With this planned, I decided to miss my Italian lesson and take my Dad to Parma for the day. It is only around half an hour on the train, so perfectly doable in a day. We had a great day looking around the Parco Ducale and the shopping streets etc. There was also an exhibition of street art on show that we came across and looked around. They were pieces that appeared to have been done specifically for the exhibition as they were all the same size and scale.

We also had great meal at the same restaurant I had lunch in when I first visited; Angiol D’Or beside the Duomo di Parma. This time though, I had something different which was also delicious! My Dad enjoyed his meal too and we shared some side dishes and looked out at the gorgeous buildings bathed in sunlight during the hottest time of the day.

On Saturday 7th we went to Bologna which he loved and we had a snack at midday and ate a proper meal later on. We walked around the shops and I showed him around my favourite shop, Desigual and the decor amazed him! Saw the two towers but with his knee problems it was not sensible to walk up the tower!

In the afternoon at 16:30, Carlos came to meet us for a drink and early dinner in the Irish bar and had a walk around. We returned fairly early to Modena as we had tickets to see a performance at the Teatro Storchi called Circa which Valentina and Andrea had been to see the night before. It was a fantastic show of acrobatics and it also had many humorous acts too which is when we realised how many young children were in the audience too with their infectious laughter.

On Sunday 8th we had a short walk around the Parco Ducale near the hotel in Modena before walking into the centre and seeing the end of a presentation outside the Military Academy. We then headed to the bus stop and arrived in San Damaso at the house I am living in for Andrea’s belated birthday barbecue and joint celebration of his nephew Mattia’s 6th birthday too. Dad even played with Mattia for a while with the ball and played with Frenchy too. She was very happy being around him actually quite quickly.

The food was delicious and we all had a great time. My Dad and I both had some Italian practice to talk to the other family members. It was great for me to also meet more of the family members that I hadn’t met before and of course, get a group photo or two!

On Monday 9th I went into the school with Valentina for early classes in the morning with 3 different groups; 1 first year and 2 second year groups so there were slight age differences. It was a great morning and they were grammar lessons in which we covered “if” clauses. The last class in particular were very well engaged with me at the beginning of the class, asking me questions after I introduced myself and during the session with the task. Very positive experiences for all of us that day. Afterwards, I met Dad for a walk around the Monday Market in Modena then for lunch at Aldina again. 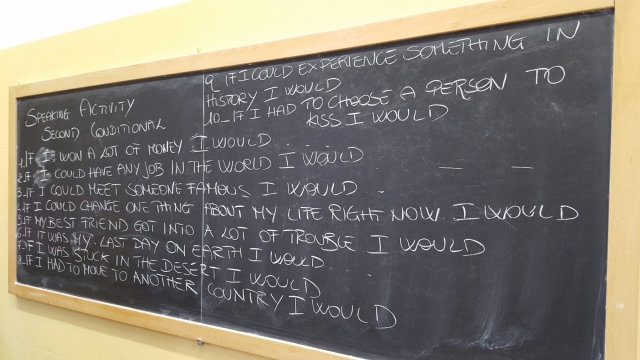 On Tuesday 10th, I let Dad have a day to do what he wanted as I had class anyway 11am-1pm, so he looked around the Ferrari Museum and the town etc and I spent the afternoon with Frenchy and took her on two buses to get to Parco Amendola and to the gelateria. She loved the bus ride but when we were waiting for the bus back, she was restless. Still, it was an achievement to get there without a car and we enjoyed it.

Wednesday 11th was his last day and we met up with my friend Valentina for lunch at Da Enzo and some shopping for me to get a dress for the wedding (which ended up being my birthday dress as I bought another dress for the wedding a couple of days later!). All in all, the trip was enjoyed and memories were created with some great photo reminders too!

Like Loading...
This entry was posted in Being Social, Bologna, Family and Friends, Meals and Tasty Treats, Modena, My Italian Adventure 2016, Parma. Bookmark the permalink.